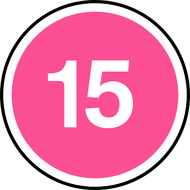 15 is a rating given by the BBFC that determines that a particular form of media is suitable only for persons aged 15 or over. Nobody younger than 15 can buy a 15-rated video, or see a 15-rated film in a cinema. It replaced the AA certificate in 1982. The age restriction of the 15 certificate is enforced by councils, not the BBFC.

The BBFC 15-rating is equivalent to an R-rating from the MPA in the United States. (Examples of 15-rated films include Deadpool, Logan, Joker, John Wick, The Purge, The Suicide Squad, Hustlers, Hereditary, Magic Mike, Venom 2: Let There Be Carnage, Parasite, Good Boys, 300 and IT).

Some NC-17 films, or films which have been edited to avoid an NC-17 rating in the United States (such as Monsters Ball, and Bad Education) have been classified 15 in their uncut forms by the BBFC. Some films rated PG-13 in the United States (such as Insidious, Truth or Dare, Happy Death Day, Venom and Split, for example) have also been classified 15 by the BBFC.

Along with the 18 rating, the BBFC 15 rating was also used as an available classification for video games prior to 2012, when PEGI ratings became legally binding.

While all non-sexual nudity is permitted, sexualised nudity is generally allowed only without strong detail (though brief glimpses of erections have appeared in some 15-rated works). Strong sexual references and scenes of sexual activity are permitted as long as they do not contain very strong detail or the work's primary focus is to arouse.

There may be scenes of drug use and drug use/imitable behavior if not glorified.

Strong language (ex: 'f**k') is allowed. Very strong language (ex: 'c**t') should be relatively infrequent and justified by context. The uses should not be repeated or aggressive, however. There may be racist, homophobic, or other discriminatory themes or language.

Dangerous behaviour "should not dwell on detail which could be copied".

According to the BBFC's 2020 annual report, 224 films for cinema release in 2020 were classified 15, including one film that was cut.

This makes it the most common BBFC rating.