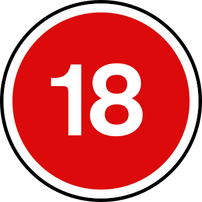 18 is a rating given by the BBFC that determines that a particular form of media is suitable only for persons aged 18 or over. Nobody younger than 18 can buy an 18-rated video, or see an 18-rated film in a cinema. This rating replaced the X certificate in 1982. The age restriction of the 18 certificate is enforced by councils, not the BBFC.

Some stores, such as Head, CeX, and many major UK supermarkets, may enforce this rating using the Challenge 25 policy, though 18-rated films are less likely to be restricted in this manner than other age-restricted products such as alcohol and tobacco.

There are no official content guidelines for the 18 classification, but the content exceeds the permissible limits of the 15 classification. This makes the point that adults, within the law, should be allowed to choose what they want to watch.

Although a direct equivalent to the NC-17 rating used for films in the United States, unlike the US NC-17 rating, films classified 18 in the UK are commonly shown in mainstream UK cinemas. In addition, this rating is used far more commonly than NC-17, meaning that, despite its function being analogous to NC-17, most films with this rating are rated R by the MPA.

Along with the 15 rating, the BBFC 18 rating was also used as an available classification for video games prior to 2012, when PEGI ratings became legally binding.

Violence is often extremely strong and non-stop with tons of blood and gore. The goriest and most sickening images are allowed. Very frequent non-stop language is permitted. F**k and especially c**t are repeated constantly in some films rated 18 (e.g. The Wolf on Wall Street (2013)). Horror in 18 films is prolonged and intense. The most shocking nightmarish scenes are allowed. There is often heavy use of blood, gore, and torture in 18 rated films. Some scenes are so shocking and so scary that they are not for the faint of heart.

Depictions of violence vary considerably between 18-rated works, with some featuring relatively brief violence that is arguably less strong than that of some 15-rated works (e.g. Fight Club compared to Final Destination), while some, such as the Saw series, feature extreme violence that undoubtedly warrants the rating.

It is rare for films and series to be rated 18 solely for language, though it does sometimes occur (e.g. Peep Show and The Thick of It).

While adults should be free to choose their own entertainment, exceptions apply to sex works. A sex work is a work whose primary purpose is sexual arousal or stimulation. Some sex works can contain simulated sexual activity and that can be placed at 18. Works containing clear images of real sex or strong fetish material will be confined at the R18 category. Notes: a sex work that cannot be accepted at R18 also cannot be accepted at 18. Some works with images of strong real sex were passed 18, given that those works are not "sex works".