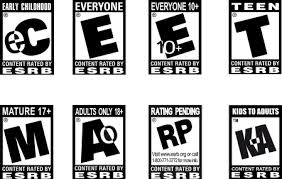 An AO rating is very seldom awarded and is also a rare rating. As per above, only 29 games have successfully kept this rating, and it places massive restrictions on game sales. Because Nintendo, Sony or Microsoft will not allow AO rated games on their consoles, publishers of AO rated games usually have to stick with PC/Mac. Most games that have been successful with this rating have been released on the PC/Mac (with the exception of Grand Theft Auto: San Andreas infamous "Hot Coffee" mod that temporarily changed the rating from M to AO).

Retrieved from "https://rating-system.fandom.com/wiki/ESRB_Rating_System?oldid=21410"
Community content is available under CC-BY-SA unless otherwise noted.