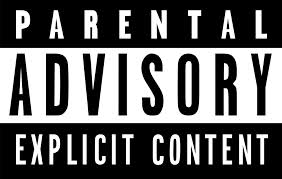 Parental Advisory is the name of a copyrighted radio recording symbol used since 1985 on CDs and other music recordings that contain inappropriate lyrics dealing with language, violence, sex, or other normally taboo topics. There are often clean versions of tapes with Parental Advisory stickers. The content label once read "EXPLICIT LYRICS" until around 2001, but the "EXPLICIT CONTENT" version had been used simultaneously since 1995.

Parental Advisory was created in 1985, under the impression that explicit CDs were easy to purchase in record stores, that teens with fake ID cards could easily buy these CDs, and that most people would stay away from CDs with the sticker. Unfortunately, however, the reverse operation occured, as CDs with Parental Advisory stickers are now more desirable than the edited versions of the same CD. Initially, the sticker was a large round shape, with "WARNING: Tone of this record unsuitable for minors". But in 1990, it was changed, and it became a rectangular shape, with "PARENTAL" on the top bar, "ADVISORY" on the middle bar, and "EXPLICIT LYRICS" on the bottom bar. In 1995, "LYRICS" was changed to "CONTENT", but "LYRICS" could be found as late as 2001 on some discs. In 1999, the design of the sticker was modified, and created its current revision.

Retrieved from "https://rating-system.fandom.com/wiki/Parental_Advisory?oldid=20809"
Community content is available under CC-BY-SA unless otherwise noted.