Not to be confused with R 18+, a classification category used by Australia.

The R18 category is a special and legally-restricted classification primarily for explicit works of consenting sex or strong fetish material involving adults. Films may only be shown to adults in specially licensed cinemas, and video works may be supplied to adults only in licensed sex shops. R18 video works may not be supplied by mail order. 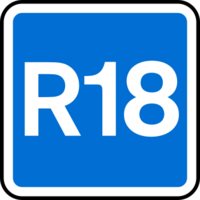 R18 (Restricted 18) is a certificate given out by the BBFC that states that a particular film contains realistic sex scenes and/or fetishes that make it to where persons under 18 are not allowed to purchase the material. It is the most restrictive of the British film certificates. These videos are, in fact, so intense and explicit, they are only allowed to be sold in licensed sex shops or in a sex theater. These videos are against the law to send by post.

More works were cut for R18 than any other category. All of the cuts for an R18 certificate were compulsory.

Content illegal under UK law and material which is deemed to be harmful to the public good is forbidden at the R18 rating. Frequent cuts at this category include underage roleplaying, incest fantasies, sexually abusive dialogue, and air restriction/choking during sexual acts.

Retrieved from "https://rating-system.fandom.com/wiki/R18_(BBFC)?oldid=26325"
Community content is available under CC-BY-SA unless otherwise noted.