A U film should be suitable for audiences aged four years and over, although it is impossible to predict what might upset any particular child. 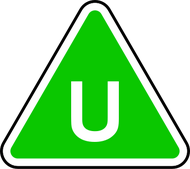 U (full name: Universal) is a classification given by the BBFC that determines that a particular form of media is suitable for all ages (four years and over according to the BBFC). The BBFC cannot determine exactly whether a U-rated film may frighten some children, and U-rated works are not necessarily aimed at children (because (until 2009) Uc is the rating for children under four). It is the only rating to survive from the creation of the British film censors to today, as A (the other rating to be created in 1912) was absorbed into today's current PG classification.

Very mild slapstick/threat and very mild bad language may be present on works classified U by the BBFC. BBFC works with no descriptors (no material likely to offend or harm) are also classified U.

According to the BBFC's 2019 annual report, 97 films for cinema release in 2019 were classified U, including one film that was cut for a U.

Retrieved from "https://rating-system.fandom.com/wiki/U_(BBFC)?oldid=26320"
Community content is available under CC-BY-SA unless otherwise noted.